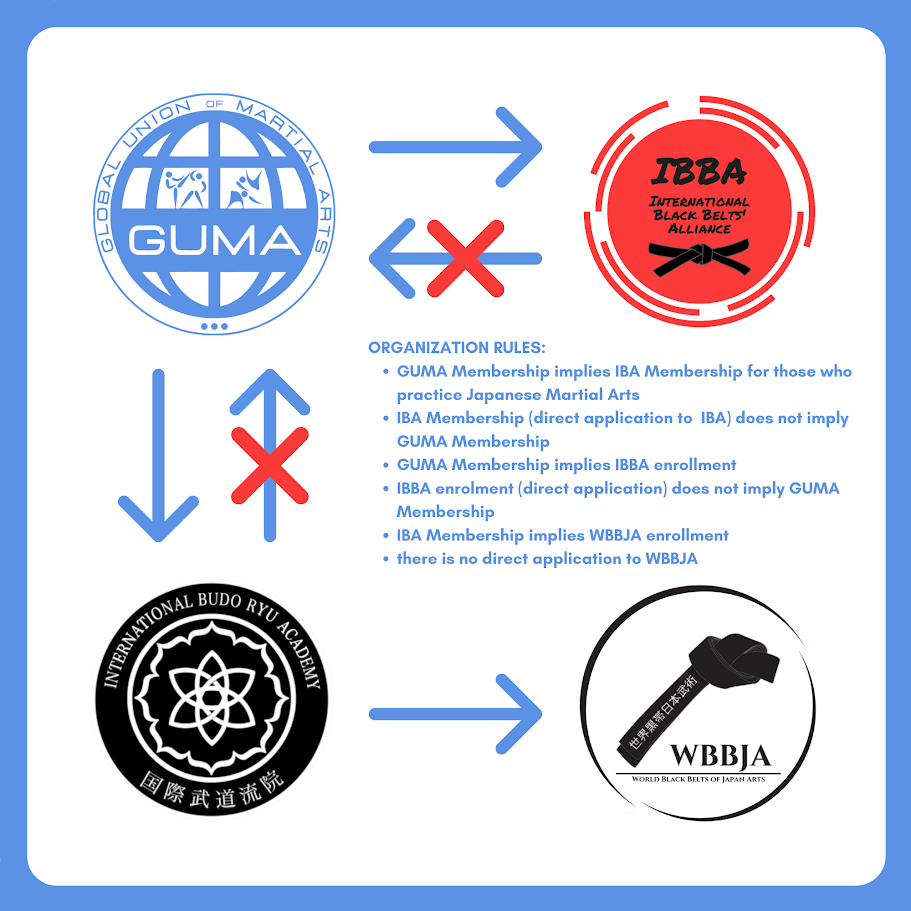 2021 FESECAM manages the International Register of Black Belts I.B.B.A. (International Black Belts Alliance) Annual membership is free.
The register will give you the opportunity to meet other black belts and participate with them in international internships.
The black belt can apply annually for the card and the certificate and the I.B.B.A. This request must be sent to:
International.ibba@gmail.com - www.internationalblackbeltsalliance.eu

Soke 宗家
Grand Master leading a Japanese Ko Ryu (literally, “Traditional School”). A Soke is entitled to establish/suppress premises of his School.
As well, a Soke can recognize/recant Ryu Ha (side-Schools), undergoing a traditional path of practice, and appoint a Soshi Soke as its leader.
Soke is also entitled to issue Menkyo certificates to Martial Artists who reached full mastery in the style.  Soke can also appoint a Waka Sensei (literally, “Young Master”) as his successor, to get in charge as next Soke on his retirement or his decease.

Soshi Soke 創始宗家
It’s a Japanese expression referring to initiators/inventors of a Martial Arts Method or Style.
Such status implies the leadership on a Ryu Ha, which is a side-School recognized, through a ceremony, by a Japanese Ko Ryu upon written consent of its Soke.
A Soshi Soke is entitled to issue Menkyo certificates too, to those who reached full mastery in his Method or Style. A Soshi Soke can appoint a Waka Sensei as his successor. ​The third Soshi Soke, in line of succession, can be appointed as Soke.

Gai Soke 外宗家
It’s a Japanese expression referring to a foreigner Grand Master (“Gai” means literally “foreigner/non -Japanese”). IBA (International Budo Ryu Academy) will process Grand Masters’ applications for the recognition of Gai Soke status, assessing documents and inquiring into applicants’ careers.
The final approval can be issued upon prior consent of the President Office.
​The documents to be submitted to IBA, for the Gai Soke recognition, must be issued from relevant Federations and Organizations. Such documents must refer to a Grand Master status, related to a specific Martial Art, Style or Method.
The minimum requirements to be recognized as “Gai Soke” by IBA: 7th (seventh) dan minimum degree; 60 (sixty) years minimum age.
The Gai Soke recognition comes with: related F.E.S.E.C.A.M. Certificate, F.E.S.E.C.A.M. International Membership Card, FESECAM Logo Patch, F.E.S.E.C.A.M.-branded Tie and Clothing Pin, IBA Gai Soke Certificate and IBA International Membership Card. Once recognized as a Gai Soke, the Grand Master can appoint a Waka Sensei, as his successor, in case of retirement or decease.

Shihanke 師範家
Such is the status can be appointed to Kodansha Masters, with a minimum age of 50 (fifty) years, who successfully submitted a worth technical syllabus for teaching.
F.E.S.E.C.A.M. President Office only is entitled to evaluate such syllabi for approval, with unquestionable assessment.
A Shihanke is responsible for teaching, develop and widespread a specific Stlye/Method. His status is comparable to the Gai Soke one.
The Shihanke recognition comes with: F.E.S.E.C.A.M. Certificate, F.E.S.E.C.A.M. International Membership Card, F.E.S.E.C.A.M. Logo Parch and Clothing Pin, IBA Shihanke Certificate and IBA International Membership Card. Once recognized as a Shihanke, the Grand Master can appoint a Waka Sensei, as his successor, in case of retirement or decease.
Every F.E.S.E.C.A.M./I.B.A. Shihanke can be recognized as a “Gai Soke” on these requirements: F.E.S.E.C.A.M./I.B.A. continuous Membership for 2 (two) years; 7th dan rank in the related Marital Art.
The Gai Soke recognition is granted upon request, prior unquestionable assessment of the President Office over the applicant engagement/effort within the F.E.S.E.C.A.M./I.B.A. Federation.

F.E.S.E.C.A.M. has accepted all Honorary IBA Members in its International Federation
All Honorary Members can request the international document for free from F.E.S.E.C.A.M. .
​Fesecam/IBA memberships and roles run for one year.
​The Honorary Member and Delegate status manke no exception towards this duration.
All memberships  and all roles must be renewed every year for keeping the person in charge.
The President Office is entitled to deny such renewal in case of inactivity from the Honorary Member/Delegate.

EUROPEAN FEDERATION of MARTIAL ARTS
We comply to the European Code of Sports Ethics approved by the European Ministries of Sport.

F.E.S.E.C.A.M. (European Federation of Martial Arts) actively acts globally carrying out activities in order to foster sport, education and culture. It follows the principles of democracy and inclusiveness in sports and cultural activities. F.E.S.E.C.A.M. involves men and women in its activities, organization and management, in conditions of equality. F.E.S.E.C.A.M. is a democratically structured organization, which is not involved in any political, religious or ethnical matter. F.E.S.E.C.A.M. blames and rejects every expression of violence and xenophobia, as well as any kind of racial, sexual, religious or political discrimination. F.E.S.E.C.A.M. keeps elective roles and positions in the central Leadership. Every role, both central and local, both national and international, is appointed yearly the Head Office and published accordingly on F.E.S.E.C.A.M. official website.

Local delegates ought to: promote F.E.S.E.C.A.M. in their own territories, recruit Clubs/Schools and collect new membership yearly, organize and schedule at least one Seminar every year.  At the end of the year, Delegates will present to the Head Office a final report regarding the activities carried out, within October the 30th. On the same date, they must provide written prospects and strategies to achieve the federal goals on the next year.

Each Dojo / Club / School must provide the General Secretary (fesecam.generaloffice@gmail.com ) with all required documents for annual memberships, including relevant teaching qualifications, ranking evidence and proof of the occurred bank transfer (all fees are published on F.E.S.E.C.A.M. website). Memberships run according to the federal year, which matches the calendar year (from January 1st to December 31st). Membership Application Forms are available on F.E.S.E.C.A.M.

The international membership fees presented below are lower than those locally applied in Italy,
since Italian fees also include further membership to a national sporting body and insurance.

In case of accident or injury, F.E.S.E.C.A.M. declines any legal liability. By subscribing Membership Applications,  the Ptesident / Head in chef of the any Dojo / Club / School automatically and implicitly states – under his / her own responsibility – that all Teachers and Students are properly insured for the Martial Arts practice. As well, the inclusion or mention of any personal data in Application Forms is under the responsibility of Dojo Presidents and Students themselves, who subscribe such forms personally and genuinely. The subscribers are personally responsible, before the law, for the truthfulness of their data and qualities.

Presidents / Head-in-chief of the any Dojo / Club / School imply, by signing the application form, that they shall take full responsibility for the statements and data provided for the application. They also take full responsibility for complying to international and local sport laws and regulations. To take part to any FESECAM event, any Member shall have passed the physical fitness test required locally by current health regulations in force. FESECAM events (such as seminars, tournaments and training sessions) can be joined by all Members, prior consent expressed through their own Dojo / Club / School. All Members are legally qualified as “non-professional athletes” in FESECAM competitions.

Teacher status (such as Master, Instructor or Coach) and federal roles (such as Local Delegate or Member of the central Leadership) have no impact on Members basic rights, limits and obligations, at any level.  Any controversy, dispute or litigation arising between a Members and FESECAM will be resolved within the Federation internally. Former FESECAM Members, for voluntary quitting or banishment from the Head Office, are not allowed to keep boasting FESECAM logos and can no longer qualify themselves as current FESECAM Members, nor Leaders nor Delegates. Any relevant violation and self-styled FESECAM qualification will be persecuted in terms of law.

F.E.S.E.C.A.M. organizes international events held by qualified Teachers, who also plan locally events and gatherings for Members throughout the year.
F.E.S.E.C.A.M. organizes an international general Congress at the end of every federal year, to which Teachers, Students, Delegates and Guests of Honour are invited to take part.
On this important occasion, F.E.S.E.C.A.M. holds inter-disciplinary technical seminars and training sessions, as well as high ranking exams for Masters.
A gala dinner is planned as side-event to every Congress, during which the FESECAM President will award Teachers, local Delegates and central Leaders who have stood out in accomplishing federal goals throughout the year.

COST OF THE EXAMINATION EXAM
COST REQUEST FOR DIPLOMAS IN CONFORMITY
Local delegate Chairs exams from 1st to 4th Dan - Exam cost € 60.00 -
Request for Diplomas in Compliance: Yudansha (From 1st Dan to 4th Dan) € 60.00- Kodansha / from 5th Dan to 7th Dan) € 90.00
From 8th Dan onwards, diplomas are issued directly by the International Federation

All people in charge of any FESECAM role do not receive any payment from FESECAM as wage or revenue (not occasionally, nor hourly, nor daily, nor weekly, nor monthly, nor yearly). People work at F.E.S.E.C.A.M. as volunteers and their activity is pro bono within a no-profit organization, aimed to Martial Arts diffusion.